A code cracking Bletchley Park war hero who sent vital information to British agents working behind enemy lines has inspired his grandson to tackle an extreme fitness challenge and raise funds for research into dementia. Derby-born teacher Ed Brindley will swim 2.4 miles, cycle 112 miles then run a 26.2 mile marathon, all in just one day, in a challenging triathlon. He’s aiming to raise at least £1,000 for Alzheimer’s Research UK, as his beloved grandfather Charles suffered from dementia in his final years.

The 29-year-old, a former pupil of John Port Spencer Academy, has been accepted as part of the Alzheimer’s Research UK fund-raising team taking part in the Outlaw Triathlon at the National Water Sports Centre at Holme Pierrepoint, Nottingham, on July 25. The event starts at sunrise with a swim, followed by the bike ride across Nottinghamshire and then the race around the city centre.

Cheering him on will be dad Noel, who lives in College Mews, Derby, mum Diane Jeffery from Church Broughton, and brother Jon from Hilton.

Ed grew up unaware that during World War II his grandad Charles was a Royal Signalman linked to Bletchley Park, home to the Colossus and Enigma machines. Ed, who grew up in who grew up in Etwall, Mickleover and Hatton, now teaches PE at Formby High School in Merseyside. He said: “We didn’t know anything about my grandad’s work at Bletchley Park until his mum’s diary was discovered. It was amazing to learn what Grandad did in the war – he never spoke about it”.

“He died in July 2007 aged 80. It seemed a perfect way to honour his memory with this ultra triathlon and to help research into this awful condition. Dementia affects so many families: it’s not just older people as I’ve become aware that people of any age can develop dementia and it is hard for their relatives. Dementia took away the opportunity to really say goodbye to my grandad. It affects families everyday. Alzheimer’s Research UK is trying to find a cure to diseases that cause dementia so this doesn’t keep happening.”

Ed is already more than halfway to his £1,000 target thanks to donations from friends and family.

Julia Sobik, Head of Sporting Events at Alzheimer’s Research UK, said: “Dementia affects a significant proportion of the population – one in three people over 65 in the UK will die with some form of the condition. That is why we are determined to help scientists discover new treatments and find ways of tackling the diseases that cause dementia, but we can’t do this without the support of our wonderful fundraisers.”

Ed’s JustGiving page for his Outlaw Triathlon Challenge in aid of Alzheimer’s Research UK is at https://bit.ly/2Qnw7hu

For further information about Alzheimer’s Research UK, or to find out more about fundraising for the charity, call 0300 111 5555 or visit www.alzheimersresearchuk.org. 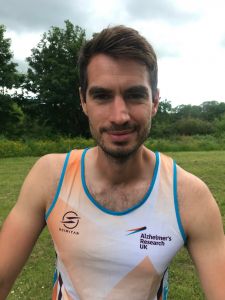 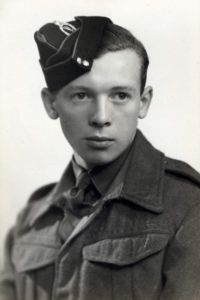 Left: Charles Brindley as an 18-year-old after signing up to the Royal Signals Corps (copyright Brindley family)

Right: Teacher Ed Brindley, who is taking part in the Outlaw Triathlon Challenge in aid of Alzheimer’s Research UK

This website uses cookies to improve your experience while you navigate through the website. Out of these, the cookies that are categorized as necessary are stored on your browser as they are essential for the working of basic functionalities of the website. We also use third-party cookies that help us analyze and understand how you use this website. These cookies will be stored in your browser only with your consent. You also have the option to opt-out of these cookies. But opting out of some of these cookies may affect your browsing experience.
Necessary Always Enabled
Necessary cookies are absolutely essential for the website to function properly. These cookies ensure basic functionalities and security features of the website, anonymously.
Functional
Functional cookies help to perform certain functionalities like sharing the content of the website on social media platforms, collect feedbacks, and other third-party features.
Performance
Performance cookies are used to understand and analyze the key performance indexes of the website which helps in delivering a better user experience for the visitors.
Analytics
Analytical cookies are used to understand how visitors interact with the website. These cookies help provide information on metrics the number of visitors, bounce rate, traffic source, etc.
Advertisement
Advertisement cookies are used to provide visitors with relevant ads and marketing campaigns. These cookies track visitors across websites and collect information to provide customized ads.
Others
Other uncategorized cookies are those that are being analyzed and have not been classified into a category as yet.
SAVE & ACCEPT

All the information and material provided on this web site is solely for illustrative purposes. It is not intended to, and does not create any business, contractual or employment relationship with The Spencer Academies Trust. All information, content, text, images, html code, photography and graphics are the property of The Spencer Academies Trust operating as John Port Spencer Academy, and may not be copied, reproduced, republished, posted, transmitted, or distributed in any way without our express, advance, written consent. All trademarks used or referred to in this site are the property of their respective owners.

Links on this site may lead to services or external websites not operated by The Spencer Academies Trust. No judgement or warranty is made with respect to such other services or sites. A link to another site or service is not an endorsement of that site or service. Any use you make of the information provided on this site, or any site or service linked to by this site, is at your own risk. This site is provided “as is” and The Spencer Academies Trust expressly disclaims all warranties of any kind, whether express or implied, including the warranties of merchantability and fitness for a particular purpose.

In no event shall The Spencer Academies Trust, or any of its employees or contractors, be liable for any damages whatsoever in connection with the information or material on this web site, including but not limited to actual, consequential, direct, exemplary, incidental, indirect, punitive or special damages.